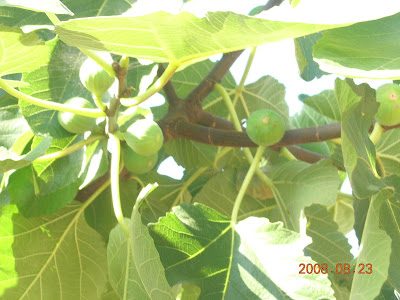 We have a fig tree on the property, a bit of a walk uphill from the house. Pio has no idea who planted it, but I bet it was the birds. In any case, it's growing on the side of a small incline which actually makes it easier to pick the fruit, although eventually I'll need to bring a ladder to reach the top. And I'll have to keep checking on them, or the birds (or the foragers who think the tree has been abandoned) will have a feast. Today only two were ripe, within a week they'll be another 20 I'd bet. Lucky for us my father-in-law's tree has tons ripe now, so we're eating them. They're of a different variety, smaller, and obviously ripen a little earlier. They are SOOOO good.

I'm thinking of making the "Fresh Fig Crostata" recipe I found in a recent addition to my cookbook collection (which hovers around 100 titles!): The Best American Recipes 2005-2006. I got it on sale when I was in NY this summer and just couldn't pass it up. It's a compendium of recipes from a wide variety of sources: new cookbooks, restaurants, magazines, newspapers, back-of-the-box or bag and the Internet, published in the years mentioned in the title (I also have the 1999 version and 2000 ). My philosophy about cookbooks, if I find just one or two recipes that I love and make often, it was worth the money. So we'll see if this crostata recipe (a free form fruit tart on a butter crust) is a winner. I'll post a picture later and give you the verdict (now how exactly will this fit with the idea that I'm back walking for an hour every morning and hoping to lose the five pounds I put on pigging out and being a slug while in NY?).
Posted by Diane at 10:58 AM

Hi Diane
I've been thinking of you often as we return to life here. Soon I will write. Anyway, I want some figs so guess I'll see what Trader Joe's has.But...I rather have them at your place. Say hello to Pio and Dante

Fresh figs! Have only had them once or twice, but unforgettable. Yours look very healthy.

I know whatcha mean about cookbooks - hard to get rid of them even with only one or two recipes in the book that are ever made.

Jane: I trust all is well and you have settled back into routine. Life here will be carefree for another week and a half, then school starts. We are thinking of going to Gardaland next week for two days. Did you go to the aquarium park that's nearby too? Where did you stay?

jgh: Yes, the figs are sweet as honey (and may actually be "honey figs" as they are common in Central Italy). They are unbelievably good. I haven't looked up their caloric value yet as I don't want to hesitate before gobbling up four or five (before they spoil, of course). They are truly a special treat and only last for a couple of weeks.

One of my favorite simple pleasures about Italy is the luscious figs! They're so unbelievably sweet. I like them with a little dollop of fresh ricotta inside :)