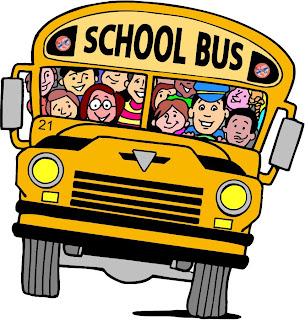 New SCHOOL Year, that is! After 18 years of being a full-time student and 20-something of being a full-time teacher, the day after Labor Day is ingrained in me as the REAL beginning of a new year. Today would be full of teacher meetings and setting up ones space (I didn't have a classroom, but rather office space, my last five years.) Lots of air kisses (on only one cheek, not both) and "Hi, how was your summer" going round, and a quick glance at the pay chart to see how much, more or less, I'd be making this year.
Ah, sigh.
Over the summer I turned in my resignation letter (it was either that or go back from my leave-of-absence) after much thought. For me it was the right decision for many reasons, but that doesn't mean it was easy. I worked with the same school system since the mid-eighties and grew up with a lot of people there (most of whom will be retiring at the end of this school year--now how did that happen?!). Next September I can begin to collect a reduced, penalized pension check (don't have 30 years in, won't have 62 years of age), but it's still more than I could make working full time here in Italy! (Which only points our how bad the economic situation is here...while prices for everything are high. But that's another post.)
For all you teachers, and students, out there...have a GREAT NEW YEAR!!
(Dante won't go back until September 15, though most teachers here in Italy started yesterday.)
P.S. The figs as pictured in previous post are literally as sweet as honey! I just wish I could get at least a kilo of them all ripe on the same day so I could make jam...maybe I'll go up and check the tree this morning, early, before I head into Rome. Lots more should have ripened since Sunday. I'm eating them raw rather than baking with them...in honor of my "New Year's" resolution to lose a few pounds!
I haven't been into Rome for months and miss the chaos. Crowds should be slightly diminished, and heat too, so it's time. Visiting a friend for an Indian lunch and a bit of conversation in English.
Posted by Diane at 5:53 AM

My Town starts school before Labor Day and my poor wife will be into her second week of school. Sure wish we could buy figs that good here in the US.

Yes, Gil, I've heard of school districts that start school at various times in August, but it just doesn't feel right to me. Neither does this September 15th start date we have here!!

Really ripe sweet figs are so soft, I wouldn't imagine they'd travel well. When I lived on Long Island we had some luck with fig trees by protecting them in winter. They never got as big, or as many figs, as we get here, but they weren't bad. I even know people who planted them in big pots on wheels and put them into their garage over winter, then rolled them out into the sunshine (and back in at night) during the spring.

Hi Diane,
Tell Dante that Casey started back today with both anticipation and a case of nerves. I know that it will go well, though and am anxious to hear his report. Can't believe he will be in middle school next year at this time.

Diane, I agree with you in that after Labor Day marks the start of school. Was always that way for me but that was almost 30 years ago. Our schools in Chandler, AZ are semi-year round so they get out in mid-May and start back up at the end of July. That's hard to get used to. They do have 2-week intersessions in October, December, and March.

I've not had the pleasure of tasting fresh figs, they sound yummy.

Hope you had a wonderful visit with your friend in Rome.

When we were kids my Maternal, Sicilian, grandfather proved that he could grow us a fig tree at my parents house. It was in a big pot that we kept in the breezeway year round. We did get a few figs from it after many years. I remember the figs not being as sweet as the ones he would get from the markets in NY and bring to our house. Maybe, the figs didn't get sweet because the tree was never brought out into the sunlight. One Spring the tree never woke up and the novelty of having our own fig tree was over. My wife and I now own my parents house and from time to time we will have a visitor that remembers the fig tree that lived where my desk is no located. We turned the breezeway into an office for me and a laundry room for us.

I too remember the fig trees in the yards of the old timers in NYC. Every Fall they trimmed, mulched and then wrapped their precious trees with a covering to protect them from the weather. Just last week I ran into an old timer that has fig trees maintained NY style not far from my house and was invited to see them. Too bad the guy never gave me his name or address!