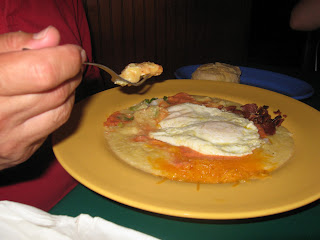 Well, less than a month ago we were eating bangers and mash--now it's grits (shown here with eggs and bacon for breakfast), washed down with sweet tea!

We've been in Charleston for about 10 days now, adjusting to life in the deep south and homeschooling.

So far we've seen dophins in the harbor, walked around downtown, ate some good meals (Jestine's Kitchen and Poe's Tavern are tied for first place in our book), spent a day at a plantation (where the guide-tour-in-training was a retired Bellport High School principal!) and briefly visited a few hot, but beautiful beaches.  Pio loves the golfing but has pulled a muscle so is out of commision for the time being.  Dante loves the Apple store, a generic version of which can be found is most cities (he dreams about owning an i-touch) and all the fried food.  As for me, I'm a sucker for the Spanish Moss which drapes from many of the trees and the different shore birds found here in the marshy low country we are surrounded by. 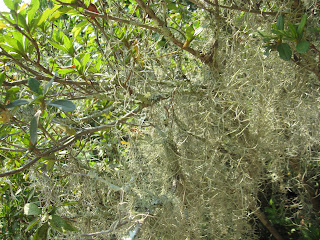 .Homeschooling is our other big adventure.  I think it's going well, but still it's hard not to have some self-doubts about the decision, especially if we are looking to re-enroll him in Italian schools in September 2011.  So far, I'm happy with our curriculum, and our supervising teacher (to whom we must send all work every two weeks for grading).  We'll get a report card and transcript as he's technically enrolled in long-distance learning program at a private school in Vermont.  Dante is cooperating nicely.

It's just a little difficult  to find "ME" time as we do school most mornings and find the afternoons too hot to do anything outside.  The neighborhood kids Dante has befriended don't get home from school until 4 pm so there a boredom gap for Dante.  He's spending his time using Skype to contact his friends in Italy and find out what's new there.  He wishes he had his xbox 360 here to help fill some time in the afternoons.  He is enrolled in a Monday evening cartooning class and next week we meet other homeschooled kids at a roller skating party.

This coming week brings the  MOJA arts festival  and we've got tickets to two events that are billed as "fun for the entire family"   Tonight there's the kick-off Caribbean Street Parade and Reggae block party downtown, and we'll go for a while, then find a bite to eat.  Saturday there's a neighborhood yard sale (haven't been to one of them in a long while!), then the farmer's market in Charleston which I'd like to check out and maybe a wine tour/tasting in the afternoon (yes, Charleston has a winery).  Maybe Pio will feel a little less homesick?
Posted by Diane at 1:07 PM

This will be very fun to follow. My constant wonder is Pio and how he is. What does he do in the am when you are homeschooling?

In theory, Pio goes golfing in the morning, but I say in theory because he pulled his hamstring golfing and so has been seeing doctors in the morning. Also food shopping, and looking for sunglasses. Sometimes he comes home mid-morning so I can run out to find the library or the gym and takes over teaching /supervising duties. So far, so good (except for math :)).

Math is a challenge. We thought when we were in Italy that would be the easy subject for Casey. It turned out to be the hardest as it is done so differently in the two countries. We had to have his tutor work on this with him.