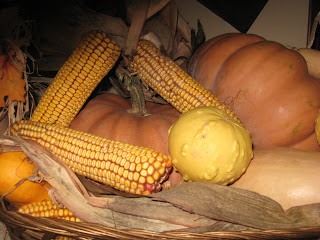 All I wanted was a small fresh turkey, to be picked up on Friday so I could brine it overnight, then cook it on Saturday for our belated Thanksgiving celebration. Not too much to ask...right?

Well, on Friday the butcher said the turkey would arrive Saturday at 10 a.m. OK, forget the brining. Then the truck that was bringing my butcher his meat delivery was stopped by the police at a random truck inspection, failed and was impounded. "Not a problem," said the butcher, who drove off to meet it about 30 minutes away. "No way!" said the police who wouldn't let said butcher remove anything from the truck. "OK, get a large chicken" I told my husband on his cellphone at the butcher shop. "What about a couple of turkey drumsticks and half a turkey breast?" my husband relayed from the butcher. OK, we'll make it work (goodbye to stuffing cooked inside the bird).
So, my husband gets home with two 5 lb drumsticks (10 pounds of dark meat from two turkey legs!) and a 3 lb. half-breast. OK, not bad. I brined it for a few hours, then threw it in the oven.
I sweated making a piecrust earlier in the morning for my pumpkin cheese pie (recipe thanks to Betty Crocker, 1968 cookbook) but it was a piece of cake (figuratively speaking). The gravy was another story.
OK, so I hate to make gravy. My mother and grandmother could take a couple of tablespoons of turkey drippings and make a gallon of gravy. And so they always made the gravy. And I've always had a mental block. So....my nephew brought me too envelopes of cheat-gravy, you know, just add water. So I dutifully followed the directions and it wasn't half bad (stirred it and all and cooked it for three minutes!). Then I decided to flavor it up with the turkey drippings...then I decided to thicken it up (now that I had watered it down) and added some "cornstarch" in a bit of cold water. INSTANT VOLCANO! What!?!? Didn't expect that reaction. I took at better look at the "cornstarch" container and saw that it was BAKING SODA! Oh no. Ruined, way too salty tasting gravy. Well, that's the best part of the meal for me so I was majorly disappointed.
OK, I decided how hard could making gravy be? I got out my "Gravy 1,2,3" recipe and thought I'd give it a try. I didn't let the fear of lumps cause too much anxiety (I have a strainer after all and that's what they're for, right?) and collected the rest of the pan drippings. OK, Nanny always started with some onions. I sautéed onions in the drippings. Added some chicken fat I had in the refrigerator. Added a tablespoon of flour, stirred, added water, more flour, more water, etc. Strained it and...it was GREAT! OK, gravy isn't really that hard, it just is last minute.
OK, so the mashed potatoes were a great hit with the Italian guests, as was the gravy and the pumpkin pie. The turkey and dressing too. The only thing that didn't get rave reviews was the apple crumble desert, which was way too sweet for them (well, that crumble topping was made out of mostly sugar ...and if they knew how much butter they would have fainted!). All in all, a nice evening. Today we eat leftovers (hurray!!).
Posted by Diane at 12:12 PM

I don't think Thanksgiving is supposed to be that stressful, maybe you could count it as a rehearsal for Christmas. Glad it turned out OK, nothing better than a gravy dinner but then I've never cooked one in Italy.

Lucky you! I didn't get to make gravy. Everything went so fast from turkey to cutting board and before I knew it, stuff was being served and I'm like...ARGHGHGH! I forgot the gravy!

Jenny--you're right, it shouldn't be that stressful, but we had invited 5 people over for their first Thanksgiving and I wanted things to be nice.

Rowena--that's the problem with gravy! You have to make it at the last second (while the cooked turkey is "resting"). If things start moving too fast you're sunk! There is a way to make gravy ahead of time with turkey wings and neck I think and I keep saying I'll have to try that next time. But this time I didn't even get a wing or a neck!

Yeah, Thanksgiving should be couple of days full of homie atmosphere without stress. But it is often not so.
Everyone is trying to make it soo perfect...that then stressful situations and arguing appear.
But I still love it!

Diane, I hate to say it but I laughed a lot reading this--then I read it to Ken. I'm glad that it all ended well--except for the apple pie. I need to remember that it isn't a good Italian dish. Actually, when we have been guests, now that I think about it, after dinner is usually cheese and fruit. Can't wait to read the upcoming Christmas story.

Jane, I'm glad a provided a bit of entertainment! Apple pie might have been better received than my apple crumble as I think it's less sweet (unless, of course, you put some wonderful vanilla ice cream on top!).

There won't be an Italian Christmas story this year as we're heading to NY next Saturday for three weeks...where I might make some cookies, but for the most part will be having a BIG Christmas Eve with the Italian side of the family, and a BIG Christmas Day with my side. Going out for New Year's Eve. No cooking for me!

I'll spend my spare time shopping (and I'm not a shopper, but everything is so expensive over here--with the exchange rate especially) so I'll be stocking up on underwear and socks for us all, a few pairs of slacks for work, and maybe an electronic gizmo or two (Ipod?, Kindle?) etc. Hurrah!

Diane, have a great time in NY. Give our greetings to Pio and Dante