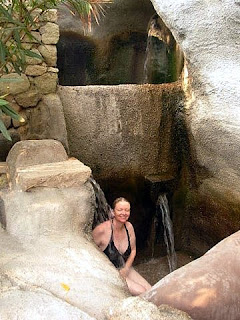 Do warm baths relax you? Could you stay in one all day, especially if it never cooled off? You'd love Ischia!

Ischia is an island off the coast of Naples, not that far from Capri in nautical miles, but much less known, and therefore, in my book, much better.

Back in late August my friend Janice from California visited me for a few days. She wanted to see where I lived, and then go someplace nice for a couple of nights. She left it totally up to me.

Well, I wanted to find a place we could get to by public transportation. Someplace where she could get seafood and someplace that wouldn't be crawling with tourists the 21st and 22nd of August--still part of the famous ferragosta vacation period when nearly all Italians head to the coast or the mountains.

I also wanted to go someplace that I hadn't been before but that wasn't more than a few hours away.

The only place that seemed to fit the bill was Ischia. I reserved us a room at a quiet hotel with water view near Panza We took the train from Frosinone to Naples (2 hours), negotiated with a cab driver to take us from the train station to the ferry terminal (15 Euros) and took the ferry over to the island (about 1 hour). From the ferry terminal we took the local bus around the island until we got to Panza, then called the hotel and they came to pick us up.

We were exhausted when we first arrived, so we ate a lunch at the hotel, looking out at the sea, then went down to enjoy the pool. Later we napped, then walked down the road to visit the "Baia di Sorget0", a natural hot springs beach. There are wide stairs winding down to this little cove and a snack bar which was just closing up when we arrived. I've read that it's possible to actually cook food by burying it in the sand in aluminum foil, but when the snack bar is open it's prohibited to bring in your own food.
The water is literally boiling as you step off the sand (well, ok, 194 degrees F). You need to use these little bridges which take you out a bit further where the cooler sea water mixes with the hot springs to varying degrees of tolerable and heavenly. Wow! We only stuck our feet in as we weren't wearing our suits, but it was nice and a place I'd love to return to.
The next day we headed out early for Negombo, one of two big hot spring parks on the island (there are numerous other, smaller parks, and hotels with pools too). We spent all day there, enjoying the sun, dipping in and out of every pool there, most more than once, eating a tasty lunch and we both had a fantastic reflexology session at the health center. It was highly relaxing.
When we left we walked toward Lacco Ameno, a pretty town, full of little shops (I got a great light blue linen sun dress for only 15 Euros) a large flower-filled piazza, fancy and picturesque hotels and restaurants. We tried to get a good pizza (Janice was dying for a Neopolitan pizza ever since reading that book about a woman's search for self in Italy, Bali and India...what was it called?). I say we tried to get a good pizza because we kept asking for them with Bufala mozzarella and I think it was just too wet to give us a crispy crust. But in any case, Janice had two that night...one at a restaurant right near the beach in Lacco Ameno, then one later at a pizzeria our hotel recommended to us (ultimately, she liked best the ones she had right across the street from our house in Giglio). After eating, we wanted to take a taxi back to our hotel, but they wanted 30 Euros. Way overpriced! We took the bus for 1 Euro each and then called the hotel from Panza once again (after we had gotten that pizza that is).
On our last morning on Ischia we headed out with our suitcases (again on the bus) to Giardini La Mortella. Janice isn't that much into gardens anymore, but nevertheless she liked it well enough and I kept wishing I had a way to visit the garden store next to it and bring home some stuff for my empty garden beds... They were kind enough to hold our suitcases at the entrance for us and we spent all morning walking around and sipping exotic teas in the pergola-covered snack bar. Very nice despite the high humidity.
Finally, we splurged on a taxi to take us and our suitcases back to the ferry terminal and the start of our trip back home.
I'm already thinking about when I can get back there! Though next time I'd probably stay longer, visit more of the island (we only saw about half of it), and stay at a more central hotel since the buses are crowded and the taxis expensive.
Posted by Diane at 4:53 PM

"Do warm baths relax you? Could you stay in one all day, especially if it never cooled off?"

That sounds fantastic, glad you had such a good time. We haven't visited any of the islands yet, so much to see, I need to get that husband of mine retired.

just popped in from the expats site and noticed you visited ischia! my dad is from there, lacco ameno actually, and it is so beautiful!! you will definitely have to go back there again. our dream is to actually move there...i love it so!!!

Gela, we really really liked Lacco Ameno and will probably stay there next time we go...

Jenny--yes, a retired husband will help your traveling about here in Italy...will it be soon?

Peter--get thee to a hot springs! I want to try the ones in Viterbo too, and I understand there are some in Tuscany too...

Guess I'll have to add Ischia to the list now! Thanks for reading arttrav and for the link on your blogroll! Hope to see you on the facebook fan page... Keep writing!

Thanks for your post and tips. Just wondering is there much of a nightlife in the little town? Grazie