Charleston Cooks!...and now I can too! 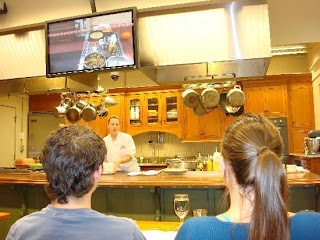 Last week I took my first ever cooking class at Charleston Cooks! , a demo lesson:  "Taste of the Lowcountry" .  As I've learned, the "lowcountry" is the area of the USA coast between just south of Myrtle Beach all the way down to Savannah, Georgia.  It's about 4 hours long by car and is characterized by the melding of cultures (Indian, African, Spanish and French) and what was available locally--corn for grits, rice from the plantations and shrimp and other seafood found in the marshy waters between the mainland and the barrier beaches.

The class I attended taught us how to make a chocolate version of the southern favorite, Chess Pie ( the name perhaps comes from a woman, responding to a compliment, saying, oh, this is "jus' pie" which in the local accent, sounds like Chess pie), a butternut squash pirlau (risotto dish with Carolina Gold rice), and "blackened" catfish fillets, which are really all in the somewhat spicy seasoning used to coat the fish before frying.  It was great fun!  The kitchen set up was great, with overhead cameras showing us what was happening on the stove and at the end, we each had a small plate of the food, a mini Chess Pie and a glass of wine.

It was interesting to get some general cooking tips  The first one was how to make piecrust (not necessary to cut-in all those pea-shaped pieces of butter until of equal, small size--it's actually betterr if they're not all tiny!) and how to ensure it's flaky, flaky, flaky (make a rectangle, cut it into thirds and stack them up...press down into another rectangle and repeat several times until the butter gets too sticky to continue...this ensures lots of layers!).

Pumpkins and squashes have intimidated me in the kitchen, starting from how hard they are to peel.  Tip number two taught me to no longer be scared!  Quarter them, oil, and bake the pieces in the oven until soft.  Scoop the pulp out and pass it through a rice or food mill.  In the class we added it to the risotto right before it was finished and mixed it in.  Wow, was that good (I LOVE winter squash and all those A vitamins!).

The blackened catfish couldn't be easier...fry in a good quantity of canola oil (no, not just 1 Tablespoon!) after they have been thoroughly coated with the cajun spices.  Good and simple!

The $25 fee was fair as it included a small meal...but of course, I did spend a wee bit in the store afterwards, which is probably the hope of the teacher! I think I might go to another before I leave, it was that much fun...maybe a participation class next time and/or an author's class (Pam Anderson will be there in a couple of weeks).
Posted by Diane at 12:55 AM