Climbin' back on the wagon... 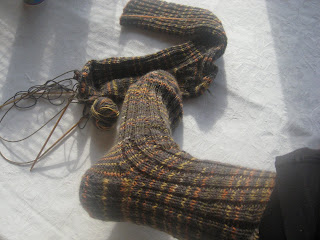 Well, I guess when I go "on vacation" I really GO ON VACATION!

I was supposed to have only two weeks vacation around Christmas/New Years, but because of a funding snafu, it extended to a full six weeks! I've been in heaven.

Before vacation I had some health issues which I thought were related to the fact that I had trouble sleeping more than six hours a night. And not walking anymore. At least I've had the chance to get into a longer sleep rhythm (between 7 and 8 hours, sometimes more!) and I've recently (now that the near constant rainfall is giving us a respite) gotten back into walking. And taking vitamins again. And I DO feel better. But I haven't been blogging. SORRY!!

What have I been up to? Well, for someone who's lived here for three years and never been to Naples (only two hours away) we went three times in December! I love it. There's something about it that reminds me of New York City I think. Has anyone else ever felt this? Oh, and the pizza and pastries are to die for. And the San Gregorio area is one of those special places in the world in the weeks leading up to Christmas.

I've also wizzed through making my third pair of socks (about two weeks, which is wizzing when you consider the last pair took me a year!). I'm proudly modelling them in the photo above. If they look a little big, it's because they're for my father. I have been doing socks on two circular needles, but was getting stuck at the point where you need to pick up stitches and turn the heel in another direction (from the tube part that goes on the ankle and is normally vertical to the sole/instep part which goes horizontal). I couldn't for the life of me figure out how to do it with two needles (actually I wanted to do two socks at a time on the two needles...but it was WAY too confusing for me without a teacher rescuing me every once in a while!). So, I had the brilliant idea to switch back at the critical moment to using four double pointeds (the way people have been making socks from caveman days) and VOILA! it got me around the bend. Then I switched back to my circulars. Ahhh....So, Dad, your socks are done! (except for a few final toe-rows I'll do today). Next will be a blue pair FOR ME! (Does anyone know how to get the picture I've posted down here instead of up there? I suspect I must edit the html...but I have no idea how!)

What else...I've also gone into Rome for a couple of work-related meetings, gone into my worksite this past week to work with a few individual students and do some testing (groups start next week) and have continued with my private English students here at the house--I'm up to 8 hours a week now if everyone shows. Great pocket money.

Which I need more of as I've gotten more fashion conscious. I guess living in Italy is affecting me. I got new eyeglasses that make much more of a statement than the rimless ones I got several years ago in New York and bought a new winter "swing coat" at the January SALDI (sales) at Luisa Spagnola. I'm even eyeing items in the Max Mara window, but I haven't actually gone in the store yet!

Part of the reason I'm now scared to spend extra money is that the money is ending before the month does because of all the work we're having done around here. The brickwork at the front of the house is almost finished and today workers are starting up on our second floor. First they are putting up a few walls (to close off storage areas and cover up the side brick walls) and then we'll have the same heating/cooling system put in the flooring that we have downstairs. Except upstairs we may make it a wooden floor. I will have a classroom up there and a guestroom. We're leaving room for a bathroom and kitchen, in case someday we need a little apartment up there, either for us or Dante. This is typically Italian!
Well, that's it for now. I have a list of things to do...and I find that if I make a list, it gets done! So, I'm off to look at my list.
I hereby promise to write much more often (if anyone is still reading). Again, I'm back on the blog wagon, so please leave a comment, even just to say HI, to let me know you're still there! Some of you have emailed me privately, just to check I was OK. Thanks! (blush blush)
Posted by Diane at 9:39 AM

Yes..we have missed you. Welcome back

Its lovely to have you back, sounds like you've been busy while you were away. Love the socks, I'm glad you are finding time to knit.