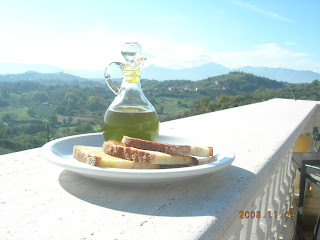 Would anyone like some? It's delicious, great with salt on toasted Italian bread.
Last week two women (I was not one of them for more than a half-day) picked enough olives just from the trees around our house to make more than 150 liters of oil! Pay is five liters of oil per day's work, but because there is just so much we'll be giving them six liters per day. By the time we're all done we'll probably have more than 500 liters. Pio's brother will be taking quite a bit of it back to the States in January...and we'll have more than enough to last us through another year (or three). The trees are making up for last year's meager harvest when we got 150 liters from 400 trees...this year from less than 50!
Posted by Diane at 7:42 PM

That does look delicious. How satisfying to be going into winter with all that stock of oil, enough to pay the workers, give away and use generously yourselves. Well done, an excellent harvest.

Diane! I'm jealous!! I wish one day to be able to experience the whole process from gathering the olives to makeing the oil. Enjoy!

Oh Diane, that looks so yummy. I can't even imagine having that much olive oil. Congratulations on your crop harvest.

If ever you need help picking olives just let me know. I couldn't think of a better payment then olive oil.

Icedtea--we ALWAYS need help picking olives!! We start on November 3rd and continue until finished. Last year we picked for only a week...this year, if the rain stops, it will probably take a month. One year we picked until Christmas as there were lots of rain delays.

Picking olives isn't particularly hard, just monotonous. The ladies talk a lot and sometimes laugh so hard they can't stop. If the weather is sunny it's actually enjoyable. And then there's the pic-nic lunch you eat out in the fields--absolutely no guilt as you've earned whatever's on the menu. I guess that's my favorite part (aside from using the oil all year and laughing).

Diane, it sounds so good!! I remember the new, new oil with such pleasure and longing. By the time we get it here, its not really new anymore.

How're Dante and Pio? Still want us to drop by next summer?

Hi Jane! Are you planning summer 2009 already? We'd love to have you visit our area and perhaps July is the better month. I am working three days a week through July 24th but am free for four-day weekends. Dante may have a week at Boy Scout camp the end of July (they won't let us know exactly until May!). Early August might work too, but then we hope to do some traveling around... Be in touch!